In July, the REPEAT team of work package 4 travelled north to study peatland restoration along Lofast II (E10), the road that connects the Lofoten archipelago to mainland Norway.

When this road was built by the Norwegian Public Roads Administration in 2004 – 2005, a relatively new restoration method was used: stripping off, stockpiling, and – after road construction – redistributing the upper 30 cm of topsoil. To assess how effective this method has been, we will evaluate restoration success 16 (and 17) years after implementation of the measures.

Additionally, we will predict how long it will take for the peatland vegetation to fully recover, that is, having a species composition closely resembling that of intact, undisturbed peatland. To predict this so called “time to recovery”, we will compare the current state of the vegetation with its state in 2014, i.e., 8 (and 9) years after restoration. Observed changes in vegetation composition between these time points will be informative for the restoration trajectory of the site. 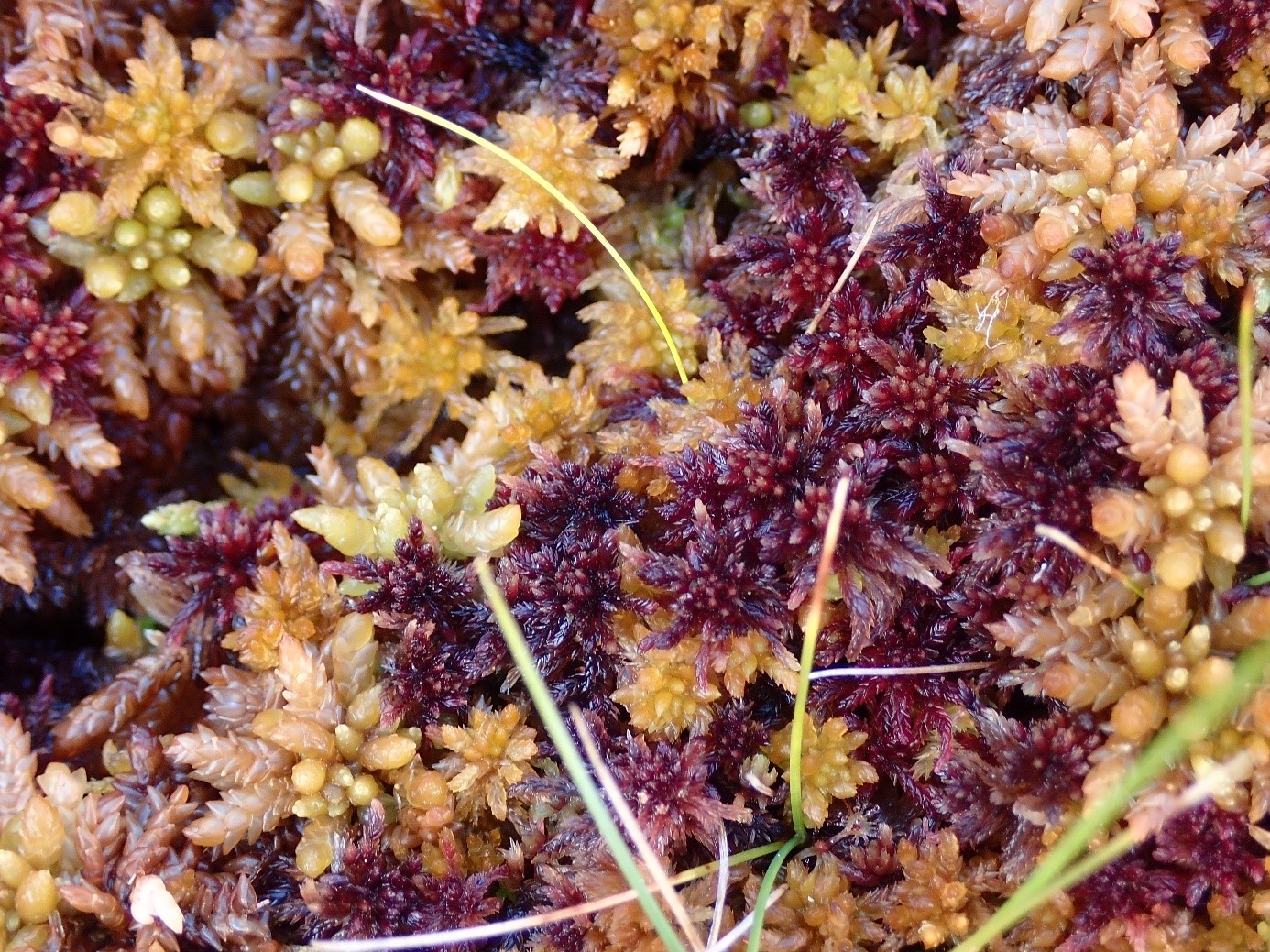 A glimpse of intact peatland in the study site, dominated by peat mosses. Photo: Knut Rydgren

To collect the data needed for this study, we performed vegetation analyses along twelve transects running from the road verge (i.e., restored-managed zone; mowed annually) via a restored-unmanaged zone to intact, undisturbed peatland (i.e., control zone). 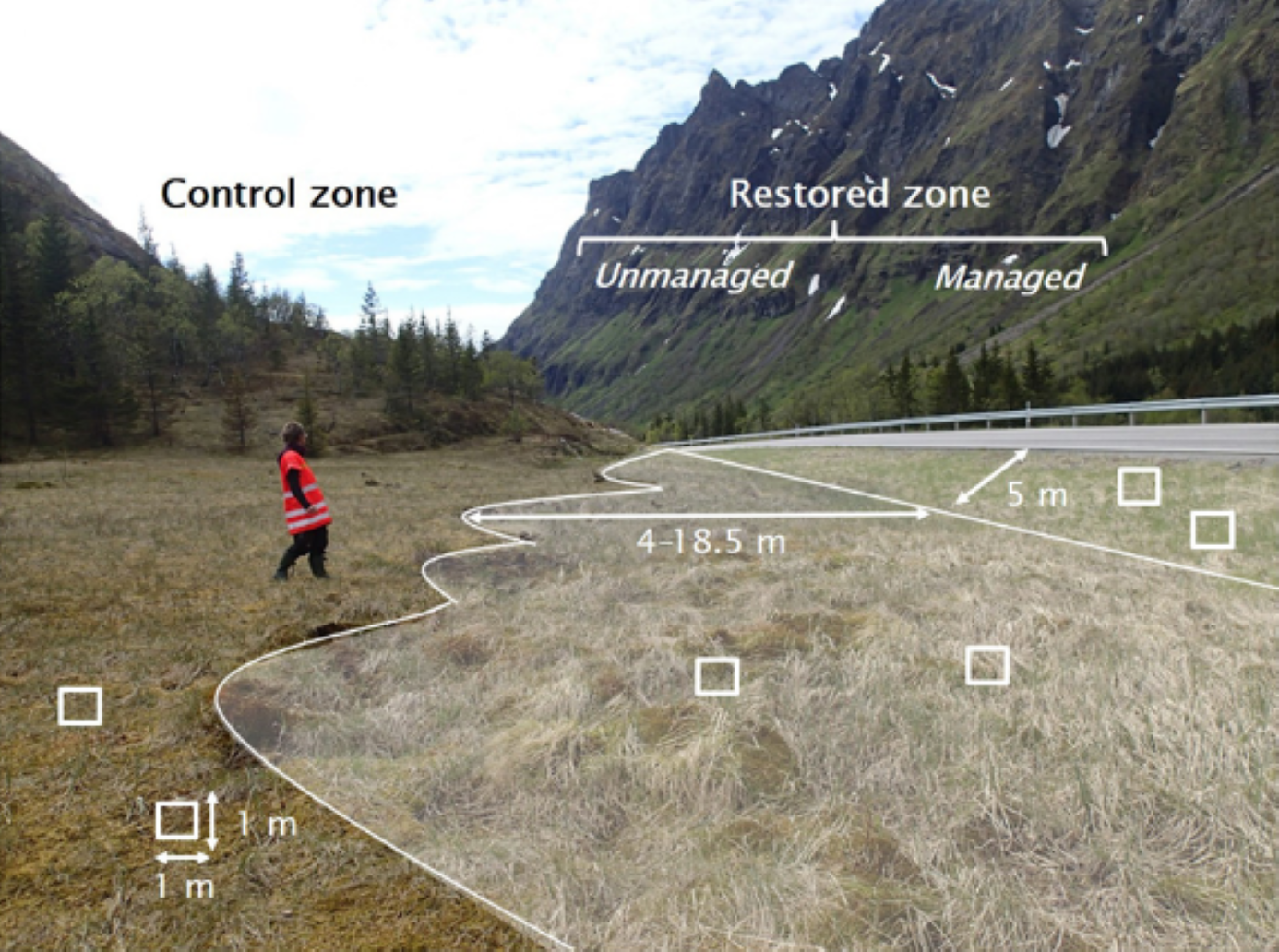 In collaboration with the Norwegian Public Roads Administration, we spent eight days working along the road, not put off by the rainy weather (something that cannot be said about the hordes of tourists passing us by on their way out of Lofoten!). 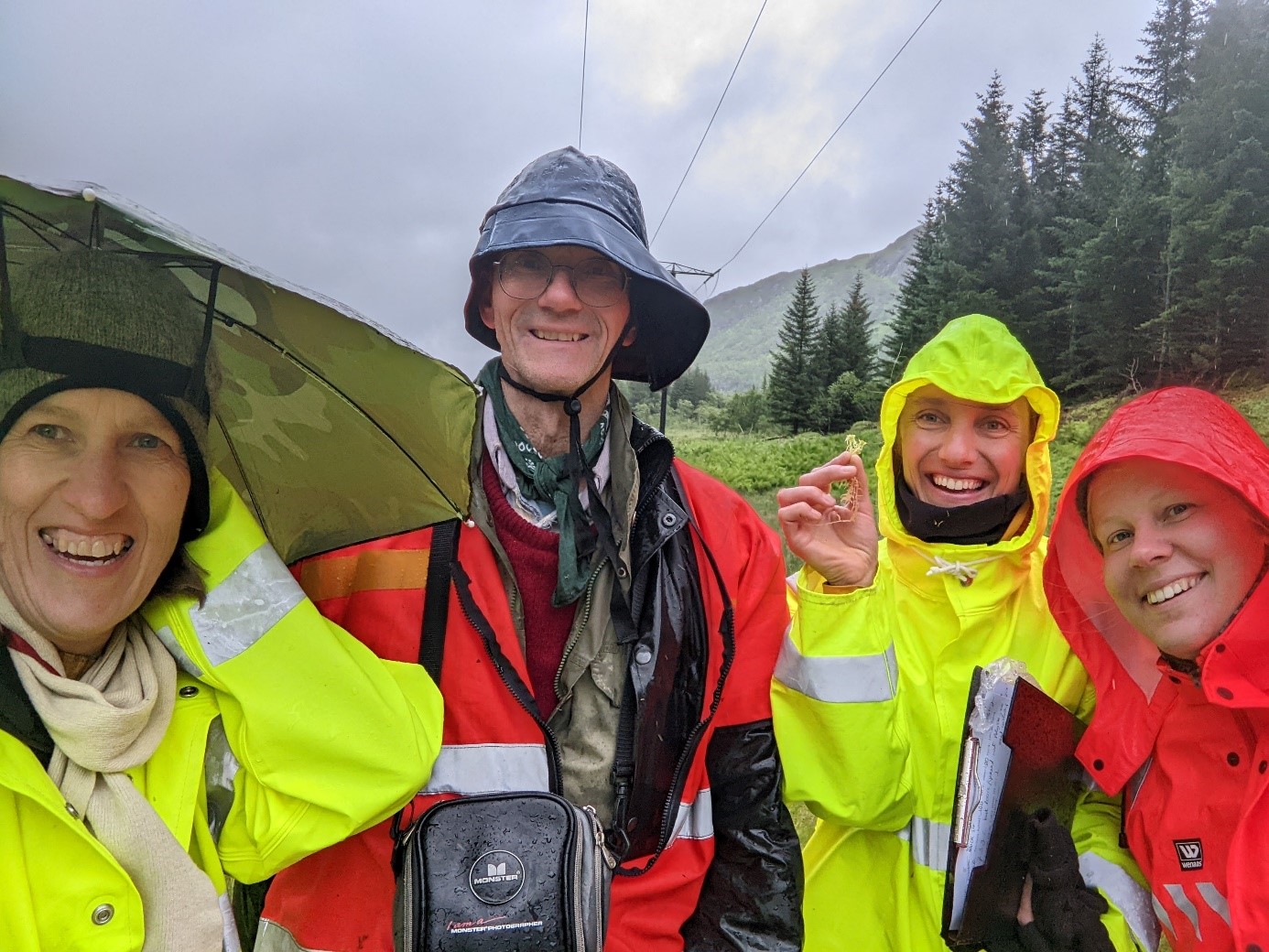 Hold your hat! The REPEAT team in the rain. Photo: Inger Auestad 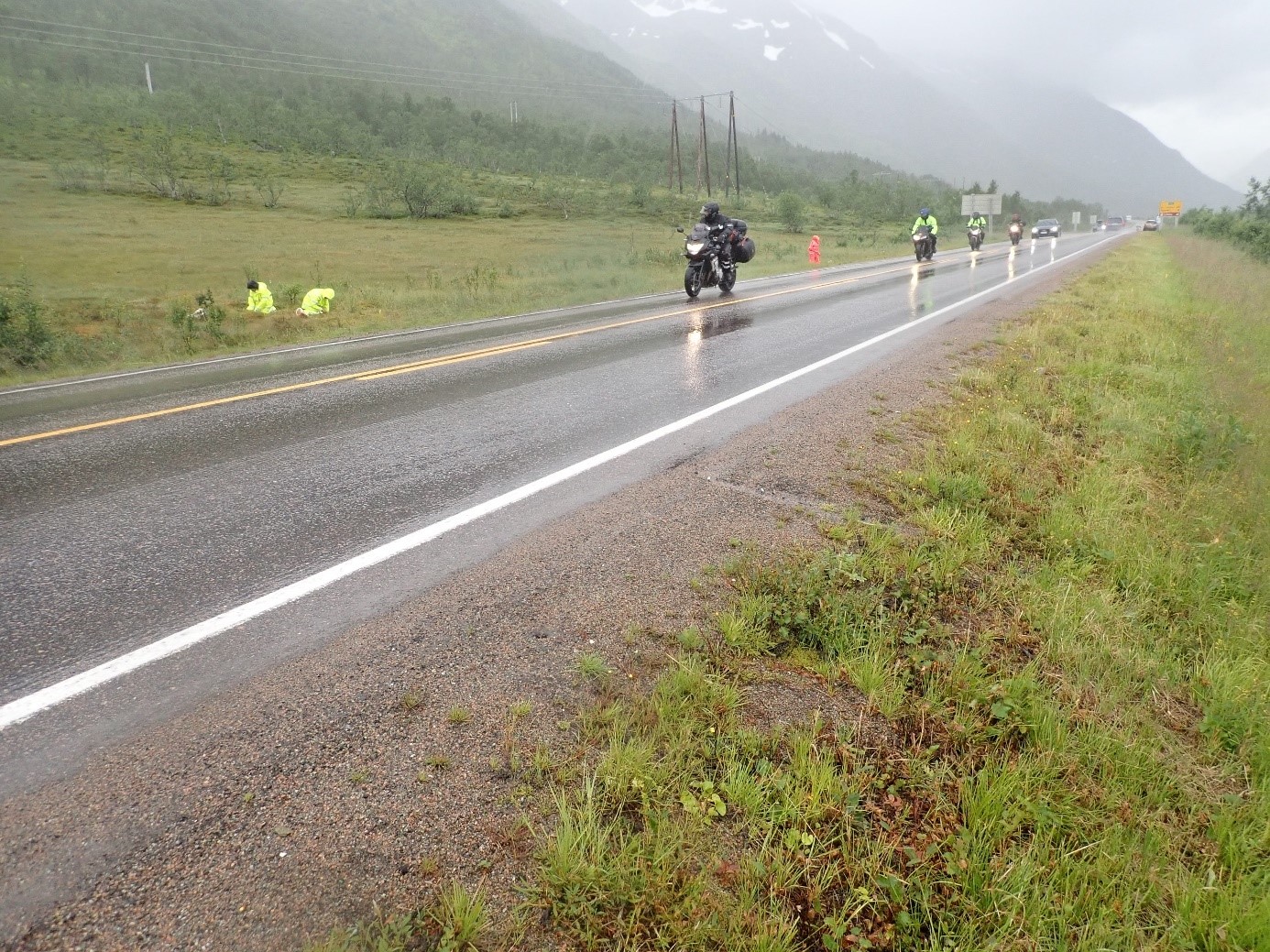 Tourists passing us by on their way out of Lofoten on rainy days. Photo: Knut Rydgren

We saved the best for last: on days 7 and 8, we got our hands dirty and collected peat samples that will be analysed in the lab to determine the pH and amount of organic matter in the soil. 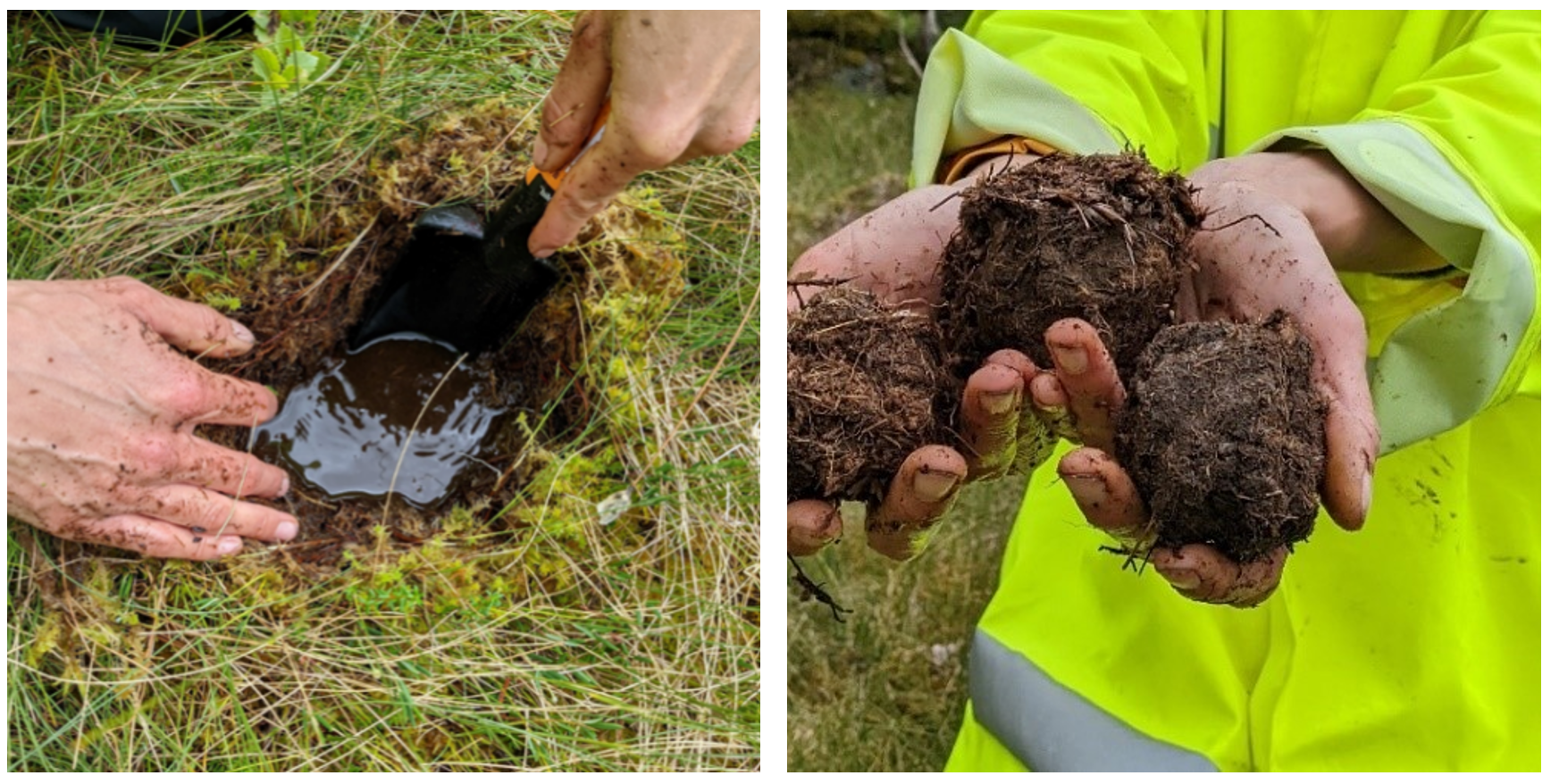 Now, back in Sogndal with a long winter ahead of us, it is time for data processing. On-site, we could already see that the restored-managed zone will never turn into a peatland again, but whether the restored-unmanaged zone has the potential to recover to a fully functioning peatland ecosystem is still to be seen. Time will tell… And so will our data-analysis, so stay tuned!