Work package 1 has finished designing and recording stimuli for the experiment. Data collection will commence in spring 2023. Planned presentation of project at FEAST.

WP2 Depiction as a tool for language learning and language development

In this work package, the purpose is to explore whether, and possibly how, depicting signs can contribute to children's learning of abstract concepts through Norwegian sign language and sign-to-speech (SimCom). So far in the project period, the leader of work package 2 and the core participants have had meetings where the project has been discussed. In addition, two kindergarten teachers in two kindergartens have contributed to the data collection and participated in discussions before and during this collection. DThe data collection is now completed.

Data has been collected through observation of reading sessions with children and interviews with children and kindergarten teachers. The parents of the children have also answered a questionnaire. Transcription and analysis of the data is well under way, but some work remains to be done.

In kindergarten B, there were also two groups of children who participated. One was Here it was read using sign-to-speech and the other using spoken language, respectively. AHere there was an observer was present in both cases.

The children were aged 5-6, and the book that was read was "Hvem rumpet brunosten?" by Erlend Loe. This is a book that is quite extensive and complicated with many abstract concepts. Due to this ,Tthe book was therefore read twiceover two days per week, and parts of the story were read and played again in various ways over four weeks. In total, there were eight reading sessions in each group in the kindergartens.

After the reading period, the children were interviewed by the kindergarten teacher. The topics were a conversation around the 20 abstract words that had been selected for the survey. Kindergarten teachers noted key words and gave a score (1-4) on word comprehension. An observer was present and took notes from the interviews in addition.

Finally, the kindergarten teachers were interviewed. These interviews were filmed.

The questionnaire to the parents was sent out both before and after completion of the period of reading sessions. They were asked about their child’s familiarity of the 20 chosen abstract words from the book. This was carried out during a period characterized by corona, and the employees were very busy during this time. This probably led to fewer responses to the questionnaire, as it was the kindergarten teachers who distributed it.

The project is progressing according to the set schedule. The project operates with a target number of five participants, and has currently collected data from four. This was done in March and April 2022. Further data collection of one or two participants in spring 2023 is therefore being considered. In the project, the participants are interviewed in individual in-depth interviews. These have been filmed, transcribed and are in the process of being annotated by the DEPICT project's research assistant. The project's WP3 and 4 have presented preliminary findings in June 2022, at The 10th EST Congress: Advancing Translation Studies in Oslo. WP3 is carried out in connection with the Ph.D. project "Deaf and woman in a new country", and will mainly be completed and disseminated, after the Ph.D. project is finished in August 2024.

The work package leader, the core participants and the international collaborators had their first meeting in September 2021 and had one meeting in June 2022. At these meetings, the project's design, timetable, project progress and relevant analytical perspective were discussed.

Interviews with deaf female immigrants, interpreted by a deaf interpreter, were conducted in the period March-April 2022. After each interview, the interpreter was interviewed with questions about her thoughts regarding her interpretation in general and the use of depiction in particular.

In May 2022, the leaders of work packages 3 and 4 carried out a preliminary analysis of the data. These analyzes were presented at the 10th EST Congress: Advancing Translation Studies in Oslo in June 2022. The presentation was entitled "The use of depiction when creating intersubjectivity in interpreting". In parallel, data were transcribed and further annotated. In December 2022, some work still remains. Once the data has been analyzed, the interpreter will be re-interviewed.

The next meeting regarding this work package is set for winter 2023.

The work package leader, the core participants and the international collaborator had their first meeting in October 2021. The project's design was discussed there, and a timetable was drawn up. In order to spread information about the project to people with combined vision and hearing impairment/deafblindness and potential participants, information about the project was published in December 2021 in SynHør-bladet and Døvblindes Ukeblad.

In order to obtain data for the project, three people with combined vision and hearing impairment/deafblindness who primarily communicate with tactile sign language, with interpreters they knew, were invited to participate. Due to illness we ended up with two of each. In June 2022, we filmed conversations between the two people with combined vision and hearing impairment/deafblindness and a lecture about Ragnhild Kåta that was interpreted into tactile sign language for them. In addition, one interpreter was interviewed after the interpreting situation.

Data from the interpreted presentation has been analysed, and during a meeting in Stockholm in November 2022, the analyzes were reviewed by the work package leader, the core participants and the international collaborator (see pictures). Work on preparing the dissemination of the results will start in December 2022. 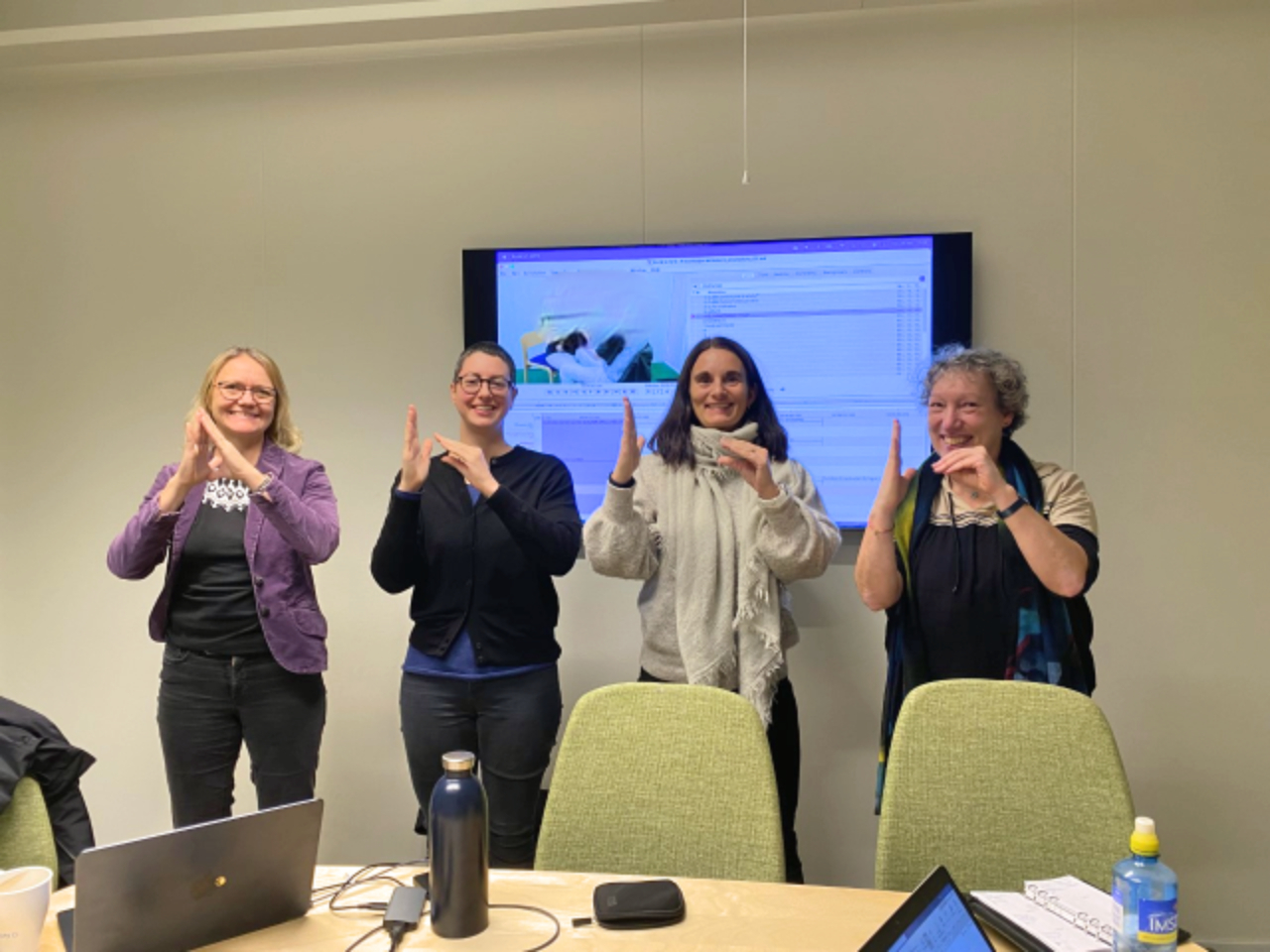 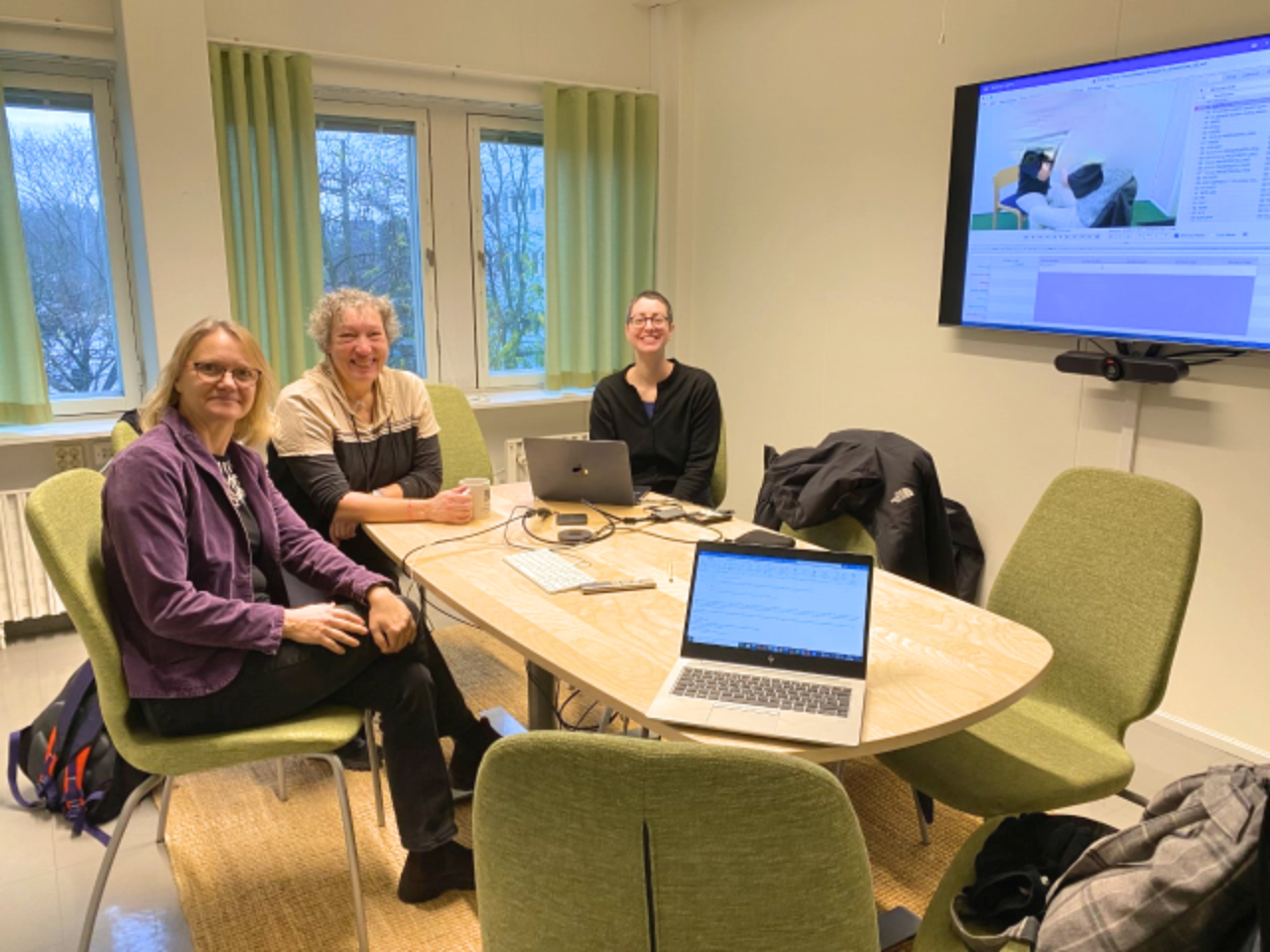 The project started in January 2022, with the recruitment of postdoc for the autumn of 2022.

The WP leader, core participant and international collaborator had their first meeting in June 2021. At this meeting, the general timeline for the project was discussed, as well as the recruitment of the postdoc. A second planning meeting was held in November 2021.

The WP leader started working on the project in January 2022 with the primary task to recruit the postdoc. The postdoc recruitment process could not finish until autumn 2022, with the starting of the postdoc (Natasha Parkins-Maliko) in March 2023.